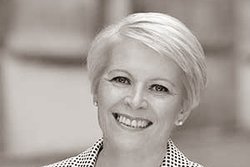 Lesley-Anne Alexander was CEO of the Royal National Institute of Blind People (RNIB) from 2004 until 2016. She had a long career in the public sector and before joining RNIB was Director of Operations for the Peabody Trust and prior to that Director of Housing for the London Borough of Enfield.

While at RNIB Lesley-Anne was instrumental in uniting the fragmented sight loss sector through the development of the UK Vision Strategy. Following an extensive merger programme Lesley-Anne created the RNIB Group of charities. Lesley-Anne has held a number of non-executive positions including being the Chair of the Hertfordshire Community NHS Trust and a NED of Metropolitan Thames Valley Housing Trust. Lesley-Anne is currently a NED on the Meridian Water Regeneration Board and is an adviser to the Institute for Apprenticeships and Technical Education and the MicroLoan Foundation – a development charity providing small business support to women in Malawi, Zimbabwe and Zambia.

Member of the Nominations and Remuneration Committee.