The Old Abbey Taphouse was transformed from a derelict pub into a cultural hub-in-a-pub, and a vital part of the community's response to COVID-19

Since 2000, a quarter of all pubs in the UK have closed, in more than 13,000 locations. Four out of five people have seen a pub close down within five miles of where they live. As a pub closes, a valuable community asset disappears, reducing opportunities to come together and socialise and also affecting the local economy.​

STEAM Hubs and Pubs manages The Old Abbey Taphouse in Greater Manchester, which was transformed from a derelict pub into a cultural hub-in-a-pub, with a focus on science, technology, engineering, art and maths (STEAM). Located near Manchester’s two universities, in the areas of Hulme and Moss Side (two of the most deprived in the UK), it’s an ideal venue for applied research and outreach, bringing innovative projects together with community-led events. ​

STEAM Hubs and Pubs applied for funding from the Growth Fund, a blended fund of £26.3 million of investment from Big Society Capital alongside £22.5 million in grants from the National Lottery Community Fund. They applied to Greater Manchester Centre for Voluntary Organisation (GMCVO) and as the initial application was primarily based on it being a live music venue, they pivoted the business and received £10,000 investment and a grant based on its shift towards a takeaway food service with meals on wheels provision for the local community.

The Old Abbey Taphouse has turned a derelict building into a vibrant community hub. It provides investment into the local economy, employing local people and reinvesting profits back into the company. Its supply chain is also made up of local businesses, which are also able to attract investment from the universities for local projects. Although primarily a venue for live music and community events, the pub also hosts a cafe and the Gaskell Garden Project, which supports refugees and people seeking asylum.​ 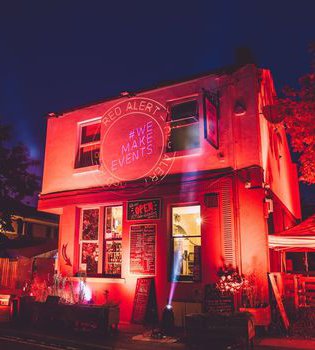 When the pandemic closed pubs and live music venues all over the UK in March 2020, the pub had to rethink its business, becoming a takeaway in response to the changing guidelines. To help people in its community, it worked with local groups to identify anyone who might need support, and has been cooking nutritious meals for those who are self-isolating, as well as families who are struggling to make ends meet. ​

As the community emerged from the first lockdown, The Old Abbey Taphouse repurposed its outdoor event space as a socially-distanced venue for 60 people, hosting quizzes and bingo. It developed Taphouse TV Dinners, a takeaway service alongside the coffee shop and hatch service it runs from the pub. As a result, its clientele has shifted away from university lecturers and staff to include many more of the local residents from the surrounding estates. The Old Abbey Taphouse is now no longer a destination music venue – it’s a community pub.